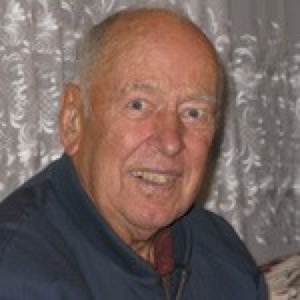 Thays E. Stanley, 85, of Santaquin, died October 10, 2009. He was born May 10, 1924 in Nephi to James Robert and Jennie Elena Stanley. He grew up in Nephi and Mona and acquired a love for farming, livestock and horses. In 1942 he met a beautiful redheaded girl at a Juab-Payson basketball game, and she became the love of his life. Her name was Adele LeBaron and she and Thays were married in the Salt Lake Temple September 9, 1943 and shared 66 years together. In April of 1944 Thays entered the U.S. Navy and served as a diesel mechanic aboard an attack transport ship in the Pacific Theater during the remainder of World War II. After the war, he farmed in Genola for a few years and moved to Santaquin in 1952. He worked at Pacific States Pipe for 34 years and then worked part-time at Stringham's True Value Hardware for many years. He loved his family dearly and enjoyed gardening, boating, fishing, horses and working with his hands. He was a member of the Church of Jesus Christ of Latter-Day Saints and served in various callings including Scoutmaster where he taught and blessed the lives of countless young men. He is survived by his wife of Santaquin, daughter Carolyn of Cummings, Georgia, sons Norman (Carma) of Shelley, Idaho and James (Karlene) of Santaquin; 12 grandchildren and 9 great grandchildren. He was preceded in death by his parents, and brothers Daryl and LaMar. Funeral services will be at 12:00 noon on Thursday, October 15th at the Santaquin North Stake Center, 545 North 200 East, with Bishop Art Adcock officiating. The family will visit with friends on Wednesday from 6 to 8 pm at the Holladay-Brown Funeral Home, 66 South 300 East, Santaquin and Thursday at the church from 10:30 to 11:45 am. Burial will be at the Santaquin City Cemetery with military rites by Santaquin American Legion Post 84.

To order memorial trees or send flowers to the family in memory of Thays Stanley, please visit our flower store.