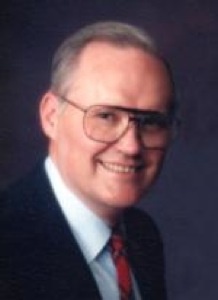 Thom served in the US Air Force for 15 years during the Vietnam war as a Captain and a Navigator. He later taught at the Air Force Academy before being hired by BYU as a Geography Professor where he taught and ran the Cartography Lab for 25 years, retiring in 1995. He was a member of the LDS Church serving as a Bishop, Branch President and Gospel Doctrine instructor. Th om was a scriptorian and was lovingly called a walking encyclopedia. He was an avid reader, a printer, woodworker and clockmaker.

Funeral services will be held Thursday, Sept. 16th at 2:00 pm at the Old Santaquin Stake Center, 90 South 200 East. Friends may call at the Holladay-Brown Funeral Home, 66 South 300 East, Santaquin, Wednesday 6 to 8 pm and Thursday at the church from 12:45 to 1:45 pm. Interment, Santaquin City Cemetery.

To order memorial trees or send flowers to the family in memory of Thomas Hinckley, please visit our flower store.