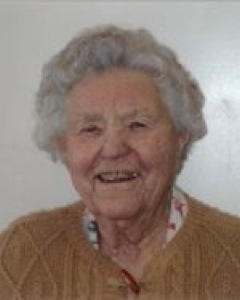 Verda Alice Ewell Throckmorton, 98, died February 7, 2007 in Payson. She was born August 1, 1908 to Zachariah Henry and Alice Tamer Taylor Ewell, the oldest daughter of 14 children. She married Sidney Daniel Throckmorton August 26, 1926 and they were married for 46 years before he passed away in 1972. Verda was born in a log cabin in Santaquin and attended school in a one room school house. She taught herself how to play the piano. She played in a band in her younger years for dances and in later years she played each week for the senior citizens. She made beautiful quilts for all her family. Her life was full of service to her family, community and church, serving in every capacity for over 45 years. She was a fabulous cook, and was known for her cinnamon rolls, sugar cookies, french bread, and pies. She grew the most wonderful garden well into her 90's. Her love for her Heavenly Father and family was shown by the example she set throughout her life. She is greatly loved by her children, 28 grandchildren, 104 great grandchildren and 71 great great grandchildren and will be missed by all who knew her. She is survived by 3 daughters, Lucille (Douglas) Thomas, Genola, Twila (Clair) Hales, Layton, Lavina Throckmorton, Payson; a brother, Arlin Ewell, Genola; 4 sisters, Mabel (Orson) Lance, Tooele, Udean Camp, Orem, Beth Scott, Las Vegas, Shirley (Darwin) Jackman, Orem. She was preceded in death by her husband, 3 sons, Arden, Ronald and Edward, a daughter, Myrna, 5 brothers, Henry, Thomas, Paul, Ernest and Elmer, and a sister, Martha Ann. Funeral services will be Monday, Feb. 12th at 11:00 a.m. in the Genola 2nd Ward, 50 North Main. Friends may call at the Holladay-Brown Funeral Home, 66 South 300 East, Santaquin, Sunday 6 to 8 p.m. and Monday at the church from 9:45 to 10:45 a.m. Burial, Santaquin Cemetery.

To order memorial trees or send flowers to the family in memory of Verda Throckmorton, please visit our flower store.