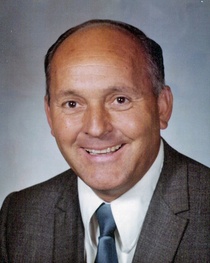 Vern W. Clark, our loving husband, father and grandfather passed away on November 22, 2016 at the age of 89. Born May 29, 1927 in Alpine, Utah to George Ernest Clark and Belle Wilkin, he was the tenth of eleven children. He graduated from BYU with both B.S. and M.S. degrees in education and worked as an elementary school teacher and administrator in Utah and California. For his master’s thesis, he wrote a history of Alpine to be used in the elementary schools. While a school teacher, he also served as mayor of Alpine, Utah from 1961-1963, cut short when he moved to California. Although there were limitations on missionary service after World War II, he was blessed to serve in the Central Atlantic States Mission from 1950-1952. He dutifully served his country in the Army and was a veteran of the Korean War. He met Darlene Baldwin, the love of his life, in Concord, California and they were married February 22,1964.

Vern loved sports, especially basketball. He played guard and was captain of his American Fork HS team and made the All-State team in 1945. He also played on, and was captain of, BYU's freshman basketball team. Vern was known for his beautiful bass singing voice, performing with a number of choirs and barbershop quartets through the years. He shared that love with his family and enjoyed harmonizing with his wife and children to hymns and songs from his childhood.

Vern was very service-oriented and loved people. He was a faithful, loving and devoted leader in his home, the church and the community. When asked what his hobbies and interests were, Vern always responded that his family was his greatest hobby and priority, and after that his lifelong membership and service in the Church of Jesus Christ of Latter-day Saints. He found great joy in all of his service such as a seminary teacher, stake Young Men President, high councilor, counselor and stake president in California, a sealer in the Oakland, Jordan River and Oquirrh Mountain temples, and as a counselor in the Oakland Temple presidency with his sweetheart Darlene.

Vern will be remembered by many as a true disciple of Christ and a man of integrity. He would lift, help and teach all he associated with. He was cheerful, friendly and looked for the good in others, qualities that never left him during his declining years with Alzheimer’s. He will be greatly missed.

We wish to express our love and appreciation to the Central Utah Veterans Home in Payson for the outstanding, loving care and friendship they gave to Vern during the last 22 months of his life.

To order memorial trees or send flowers to the family in memory of Vern Clark, please visit our flower store.