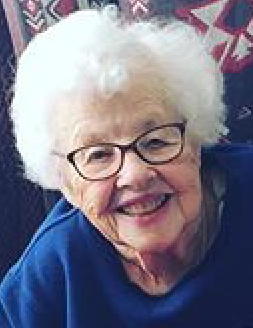 Virginia Kathleen Randle Badertscher age 90 of Eureka, Utah passed away on October 15, 2019 in Springville, Utah.  She was born on June 17, 1929 in Eureka, Utah to Harry Randle and Jean Sutherland Randle who preceded her in death.

Virginia attended Utah State University but was raised and lived most of her life in Eureka.  She was married in June 1949 to Ray Louis Badertscher who also preceded her in death.   She and Ray had three sons and were successful merchants of Randle’s IGA and Randle’s Variety Store for many years in Eureka.

She loved her family and doted on her grandchildren as they spent time with her while growing up.  As they grew and had families of their own she was delighted to spend time with her great grandchildren  She enjoyed participating in the Entre Nous Women’s Book Club, traveling throughout the country, spending time with friends and relations and always looked forward to family get-togethers.

Virginia is survived by her family that loved her so very much including: her sister Lois Randle Baker of St. George, UT, three sons: Lee (Jeannie) of Covina, CA, Fred (Cori) of American Canyon, CA and John of Reno, NV.  In addition she has six grandchildren: Nicole, Erik, Randle, Les, Gary and Alex and eight great grandchildren.

A celebration of life service is planned for Saturday October 26th at the Eureka Methodist Church starting at 11 am followed by a brief graveside memorial observance with a reception to follow.

To order memorial trees or send flowers to the family in memory of Virginia Badertscher, please visit our flower store.