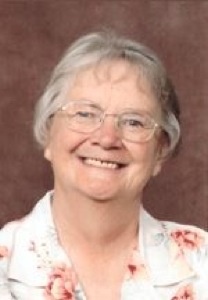 Willetta Kotter Oberg, 70, passed away January 9, 2008 at her home in Santaquin after a long and valiant battle with cancer. She was born December 19, 1937 to Vernon H. and Mary Welling Kotter. She spent her childhood growing up in Brigham City, Garland and Payson. She married Robert Harold Oberg July 6, 1954 and were later sealed in the Manti LDS Temple. Robert and Willetta were blessed with six children; Craig (Diane), Blain (Laura), Keven (Karen), Daren (Brenda), Shae (Bart) Walker, and Kanda (deceased). Willetta was an active member of the LDS Church and was a great example of faith and courage to all who knew her. She loved the gospel and knew the value of hard work. She was a beautiful seamstress and will be remembered by her family for the beautiful articles she left behind. She also enjoyed gardening, canning, sewing, but most of all spending time with her family. She is survived by her loving husband, Robert; their five children, 22 grandchildren, 13 great grandchildren with four more on the way; sisters, Marilyn Manning, Joan (Phil) Jones, Dorothy (Loran) Sayer, Sharon (Daryl) Anderson and Marjorie (Alan) Fife; and a brother, Fredrick Kotter. She was preceded in death by her parents, daughter, Kanda, grandson, Courtney Oberg, and great granddaughter, Shaelee Woodland. Funeral services will be held Monday, January 14th at 11:00 a.m. in the Santaquin 8th Ward, 45 South 500 West. Viewings will be held at the church on Sunday from 6 to 8 p.m. and Monday from 9:45 to 10:45 a.m. Interment will be in the Santaquin City Cemetery. The family wishes to thank Dr. Wendy Breyer and staff and Utah Hospice Specialists for their kind and loving care.

To order memorial trees or send flowers to the family in memory of Willetta Oberg, please visit our flower store.