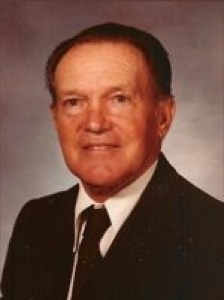 William Boyd Stansfield, 88, of Goshen passed away on February 6, 2008 in Payson , UT of causes incident to age. He was born in Goshen , Utah to William Henry and Eva Lillian Nelson Stansfield on September 22, 1919. His parents died when he was a young boy. The youngest of 7 children, he was cared for by his older siblings. He received his education at Goshen Elementary- Junior High School and graduated from Payson High School where he excelled in track and field. Receiving a scholarship to the University of Utah , he attended one year, winning numerous awards in track and field, before enlisting in the U.S. Air Force during WWII. Following his honorable discharge, he returned home to Goshen and married Lila Mabel Finch on March 9, 1946. Being a skilled airplane mechanic, he was called to Wheeler Field, Oahu , Hawaii , on a special project to repair B29's. Returning to the University of Utah , he graduated with Bachelors and Masters Degrees. While in SLC, his first daughter, Cynthia Lee, was born. He taught at Horace Mann Jr. High, and then happily moved back to Goshen where he was a teacher and principal for 35 years. During this time he made "a difference" in the lives of hundreds of students and their families. He was instrumental in building the "new" Goshen School and encouraging students to do their best. He truly cared for his students. He was a successful rancher, thriving on hard work, his love of animals and his family working along-side him. He was proud to be a member of the American Legion- Post 123, Warm Creek Water Association, Goshen Cattle Association, NEA, UEA, and the Nebo Education Association. He was also a member of the LDS church. His first love was his family; in later life he especially enjoyed his grandchildren and great-grandchildren. He is survived by Lila, his wife of 62 years, 2 daughters and 2 sons: Vickie (Craig) Smith, Oakley, ID, Claudia Fuell, William Boyd Jr. (Vickie) Stansfield and Joseph Stansfield all of Goshen, 16 Grandchildren and 26 great-grandchildren. Preceded in death by daughter Cynthia Lee, his parents, 1 brother and 5 sisters. Mildred ( Jackson ) Branagan, Elizabeth (Wallace) Hickman, Inez (Frank) Peterson, Jack (Noretta) Stanfield, Margaret (Frank) Salisbury and Jean (John) Johnson. The family would like to thank Dr. David Bennion, the staff at Payson Nursing and Rehab and the Cambrie House, Alpine Home Health and Hospice, and his kind neighbors and friends. Funeral services will be held Tuesday February 12, 2008 at the Goshen Ward LDS church at 11:00 am, with a viewing Monday February 11, 2008 at the Holladay-Brown funeral home at 66 South 300 East, Santaquin from 6:00 - 8:00 pm and Tuesday one hour prior to funeral services at the Goshen LDS church. In lieu of flowers, the family suggests donations be made to the Goshen Elementary School . We love you so much Grandpa!

To order memorial trees or send flowers to the family in memory of Wm. Stansfield, please visit our flower store.