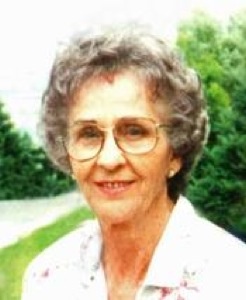 Zola Mullins Allred, age 92, passed away August 21, 2011 in Santaquin, Utah. She was born to Harmon Earl and Lula Morrill Mullins in Lapoint, Utah, February 27, 1919. She spent her childhood in Roosevelt until age ten when her father passed away and the family moved to Provo. They returned to Tridell in her teenage years. Zola graduated from Alterra High School. She married Dee Vern Allred shortly thereafter in the Manti Temple. She and Dee made their home in the Roosevelt area throughout their lives.

Zola worked as a telephone operator under the old Bell system, before becoming a teacher's aide for the Uintah School District, a job she liked very much. She enjoyed her many callings in the Church of Jesus Christ of Latter-day Saints and in later years found pleasure working in the Vernal Temple. The joy of her life was being with her family whom she loved dearly.

She is survived by three children: Earl V (Carma) Allred, Deanne (Clark) Miller both of Roosevelt and Shirley (Philip) Rowley of Santaquin . She is also survived by 18 grandchildren and 64 great grandchildren, all of whom have special memories of time spent with her. She is preceded in death by her husband, Dee, her five brothers, a grandson, Jon Dee Rowley and a great grandson, Chet Miller.

Funeral services will be held Friday, August 26th at 11:00 am at the Uinta River Ward chapel in Lapoint, Utah where family will greet friends from 10:00 to 10:45 am prior to services. Burial will follow in the Roosevelt Memorial Park.

To order memorial trees or send flowers to the family in memory of Zola Allred, please visit our flower store.